9/11 Remembrance and a Stronger Future...

Posted by Lynne on September 13, 2011
I think all of us can remember back to where we were on September 11th of 2001.  Josh was on his way to work and the children and I were getting things together for our school day.  At the time, Samuel was just a baby and as it would be, we had no TV.  There was a time in our life when we were modern Luddites and shunned many of the technical devices that make life a little more fun. I know it seemed odd since my husband is on technology's cutting edge in order to earn a living but we've never been ones to live by the norm so we had the radio on listening to the reports regarding the attacks.  Once we realized the extent of the attacks, Josh turned around and picked us up so we could go to where there was a television and visually see what was happening.

It wasn't that long ago that we had experienced the Oklahoma City bombings and being we were in Tulsa, it brought back memories of the shock of such a hideous act being wrought on innocent people.  While the bombing in Oklahoma was severe, no one could have ever expected what was unfolding before our eyes.  When the first tower fell, I think the hearts of every American came down with it.  We have been blessed to have so long been protected from violence on our shores that the realization of the events took a moment to set-in.

That day changed our country forever.  No longer did we just 'hop a plane' somewhere.  No longer were we innocent.  As parents, we knew that day that we were going to be handing our children a much difference world than was handed to us.  There was much controversy over what we should do, what has been done and how to handle it in the future.  I wish there was a right answer and that it would be that simple but as we have seen over the last ten years, right can be a matter of opinion sometimes.  What we do know is there has not been an attack since so there is victory in that alone.

Over the 9/11 10th Anniversary weekend we found ourselves in the strange position of having to show identification to get to our home.  I never dreamed that in America, papers would be required.  I understand we need to stay vigilant and being as we are close to the World Trade Center Memorial, they needed to be protective which is good, but, somehow as you begin to pull out your two forms of identification you begin to feel your heart sink a little and the realization that they won in some small way.  Our way of life has changed.  Maybe it is that we are just no longer as naive as we used to be or maybe it is that we are loosing the freedom so many have laid down their lives for, little by little.  No matter how you feel, what is evident is our world is different.

As our church is only two blocks from the World Trade Center Memorial, we had to cancel because of the strict security in the area.  For this important day, we stayed at home, tucked in our warm and cozy apartment reflecting on our own.  There was sense of pride as we sat in bedroom and watched the USS New York slowly begin to pull away from the harbor and circle the Statue of Liberty.  Taking the steel from the Trade Centers and making it into a vessel that fights for the Freedoms that America has always stood for was a fitting tribute to those who lost their lives.  Nothing can possible serve as an adequate remembrance of those souls or those who worked so hard to save many other lives but there is something special about the USS New York, it seems to somehow encompass everything you feel inside but cannot explain.  Not often do you cry when you look at a warship. 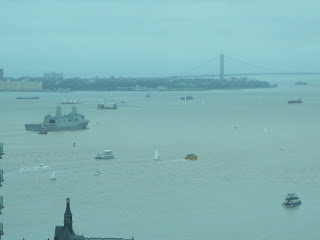 By the time night fell, the barricades were down, water traffic was back to normal and our lives began to resume their daily rhythm.  It was over, the ten years had been marked.  Now we forge on to the future yet again.  As the Freedom Tower begins to take shape, it has finally reached the top of the skyline so you can see its mark on the The City.  No longer will there be empty space as a reminder of that day but there will be a symbol of our stronger future.  As Americans we once again pushed past adversity to search for that brighter tomorrow.

May God Bless and Keep You in His Grace,
Lynne

Spinzilla 2015 - End of Day 6...from a Disabled Spinner's Prospective!

Today had to be a 'down day'.  I tried but didn't get very far in spinning.  I got a few yards but my legs topped working.  I think I found my limit.  I usually find a way to work past them, 'If there is a will, there is a way', but today I had to concede I could go no further. Jeri Brock Turkish Spindle Merino Top with Sparklefire    Tomorrow is the last day of Spinzilla.  I was hoping to make my mile but with today down, it is less likely.  Maybe next year I will have an electric spinner and be able to spin more yarn.  My endurance capabilities didn't match my goals.  After this week I do see the importance of not insisting on forcing my body to do things it just can't do.  I am continuing to save for an Electric Spinner for Healing Fibers.  I want other disabled people to experience the joy of spinning even when moving their legs is difficult or impossible.  I see better the importance of using tools to fulfill your dreams instead of taking th

Spinzilla 2015 - End of Day 7,..from a Disabled Spinner's Prospective!

Yak/Silk Blend with Sparklefire as an accent.      Today was the end of Spinzilla 2015.  I have on my bobbin the last of the fiber I can count.  It is over, I have completed my first Spinzilla.  I have a goal to participate in Spinzilla every year that I spin so even though I knew it was a little green to tackle such a big project, I wanted to at least try.    I have not computed my yardage yet but I know I have fallen far short of my mile goal.  There are many reasons I did not achieve my goal: as I mentioned, I am a new spinner without the speed that comes with experience, I am disabled so my legs were not always as cooperative as I would have liked and I lacked stamina.  I can see now I might have overshot my goal without consideration of the ability of my legs which is hard to admit since I would like to think I could keep up with anyone.  An electric spinner would have made far easier work of at least part of the week, but alas, I am still saving.  Maybe next year....

A Memorial for Ren...

Today I pay tribute, far too soon, to my bonded glider, my rider, my friend, my comforter, my little love, Ren.  This is one of the most difficult posts I've ever written because Ren was very special. Ren Snuggling Grandma Pear...Astrid below If you have seen me over the last 3 years and asked to see a glider, there is a 99.8% chance, I pulled out Ren.  Ren is the one you took pictures of, or ran up and down your arm, she is the one that dove in your shirt, or sat quietly in your hand, usually squirming to jump to me and crawl back into my shirt to nestle down in her home. Ren riding on me...as she did every day. As many of you know, I have a damaged central nervous system that has caused a severe nerve condition.  When I go out in public, it is harder than most people realize for me.  I stress over having brain fog that prevents me from putting my words together easily, I quickly get nervous in my surroundings and am always dealing with a level of pain tha